Becoming ‚Chief of the court‘: knowledge, mental preparation and horses 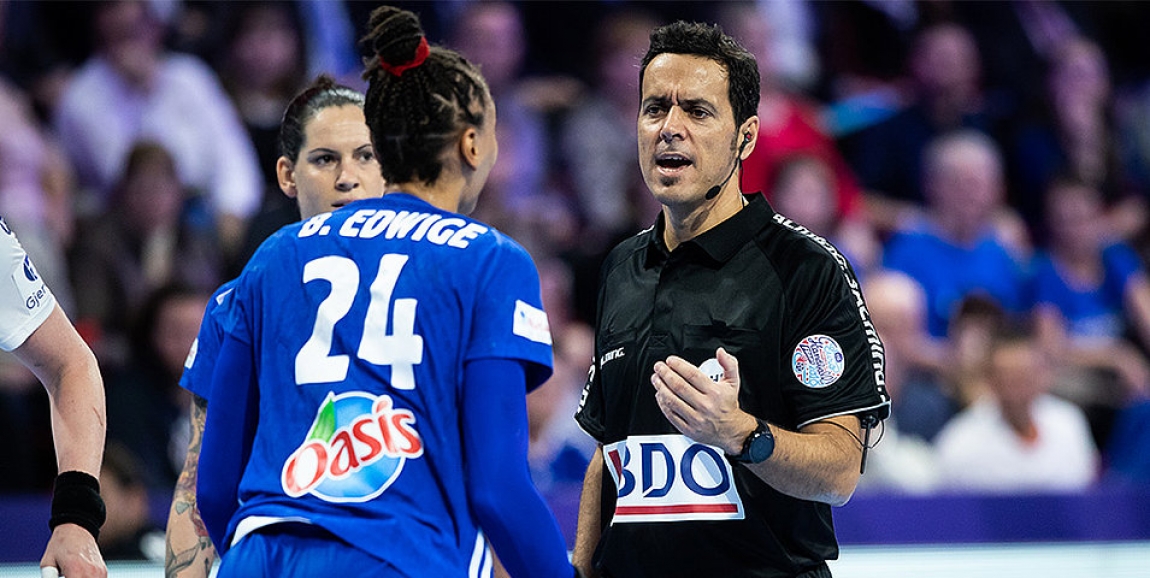 Performance coach Jürgen Boss works with EHF referees at European Handball Championship in France in training mental preparation and body language, which he says are two of the main keys to success in this demanding role.

“If you are looking at referees, what is important? A lot of referees know the rules, and for professional referees, it’s only about 30 per cent influence on the success. 70 per cent is authority, personality, being able to make decisions.”

EHF referee performance coach Jurgen Boss is speaking in a break from his job helping to prepare the EHF EURO 2018 referees for the aspects of their role that might not be apparent to spectators.

Knowledge of the rules is a crucial part of being a handball referee – but that is not enough to whistle at the top level. Referees must be able to handle extremely stressful situations, make good decisions in these moments, and show players and coaches that they are the authority. For Boss, there are certain key performance indicators, and it is far more complex than it might first appear.

“They have to see what is happening. That means they have to be in a good situation with their brain so that they can work with the information,” says Boss.

Those Boss has helped, in addition to business people, include 2007 world champion Dominik Klein and two of Germany’s top referees, Robert Schulze and Tobias Tönnies, who will whistle at the upcoming Men’s World Championship in January.

Conveying authority as “chief of the court”

A former handball player himself, Boss admits he did not think much of the role of the referee during his time on court, but he became interested when he realised referees did not have much support in the crucial aspects outside of knowledge of the Rules of the Game. Many years later, that has changed, and there is far better understanding of the psychology of refereeing.

“No one was there working with them to do the same thing as professional people, handling extreme situations,” says Boss, before explaining how EHF Competitions Commission member for refereeing Dragan Nachevski highlights a need for referees to make good decisions and communicate their authority, using personality and body language.

“That means you have to be empathetic in such situations. That’s also difficult, because in stressful situations you cannot be empathetic. So, what does this mean? You have to train this, to handle such emotional situations,” continues Boss.

Body language is extremely important for referees to convey to players, coaches and teams that they are the “chief of the court”.

Boss uses tools such as vision exercises to help referees gain this attitude internally. “Automatically, with this internal attitude, you get this external attitude – and that is important for them and also for the players.”

The key to success

While referees receive extensive feedback regarding their decisions related to Rules of the Game, Boss says it is important not only to focus on specific situations or what went wrong.

Managing these stressful situations during matches and being able to perform at the highest level in refereeing comes back to the so-called ‘flight or fight response’, which is related to how the brain reacts to tense situations, and how that reaction then influences the body.

“You take neuroscience and bring it down to a level so that everybody can understand it through simple methods,” says Boss. “The difficulty is to accept it and to ritualise it, so that you can use it in stressful situations and not fall back into your normal situations, which means attack, run away or to be shocked.“

Working with EHF referees outside of events, Boss helps them improve their body language using such unexpected ‘tools’ as horses and boxing. As horses are sensitive to body language, they are very useful in practising non-verbal cues and assertion of authority using the body, while the focus in the boxing exercises is on controlling the breath in a tense situation.

A new focus on recovery

At the EHF EURO 2018, Boss is available to assist with match preparation in any way the referees might need – whether it be discussing unforeseen situations or how to prepare for certain players or coaches.

“The other thing is very personal. Some said to me: ‘I want to have more personality or better body language’, and we train it before. The possibility here is we have good TV and videos, and we can have a look at that after the match and they can see for themselves. What was the goal of this match? What they have practised and what was the effect? If we do it twice or three times you see the performance.”

He also helps referees how to understand and take care of their body, which includes recovery methods.

“What’s new now in these methods is regenerational recovery. It’s very important, if you are a player or a referee, to be recovered and to be in a good situation, in a good frame of mind,” says Boss.

He recommends using special frequency-modulated music which influences the part of the nervous system responsible for resting activities, helping referees move out of the ‘fight or flight’ mode into one where they are able to sleep well.

In addition to the focus on quality sleep, Boss helps the referees determine what suits them personally when it comes to recovery.

“We train them to get the feeling about their body back, to find the best way to recover. That’s something new we do.”

With the busy schedule over the 18 days of the EHF EURO, Boss’s methods will help keep the referees in peak condition and able to make those decisions which are crucial to the outcome of the matches.